Welcome to the Church of God of Prophecy ​in the State of Washington! 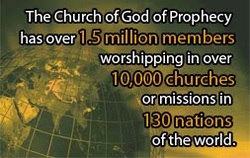 The Church of God of Prophecy (COGOP) is a Christian, Bible-believing, Spirit-filled fellowship that has been in existence since the late 1800's. We are a vibrant, worldwide body of believers, united in worship, working hand-in-hand to share God’s love and a message of hope to the brokenhearted. The Church of God of Prophecy has over one-and-a-half million members, worshiping in over 10,000 churches or missions in 135 nations of the world.  Please visit our International Office site.

PLEASE KNOW THAT ALL DATES BELOW ARE TENTATIVE.
We will make updates as information becomes available to us.